With the advent of bariatric surgery, more commonly known as weight loss surgery, more and more people are able to achieve their goal weights and a healthier lifestyle. As a result of the massive weight loss that accompanies bariatric procedures, many people are left with large amounts of hanging skin and fat as their tissues simply are not able to contract back. No amount of increased dieting or exercise can reduce this excess tissue, and often surgery is the only recourse.

For most weight loss patients, multiple plastic surgery procedures are necessary in order to achieve their aesthetic goals. The most common areas that people address in the first stage include the abdomen and the breasts or the arms. As a result of the large amount of weight that was lost, many patients have an enormous amount of redundant tissue and fat in the abdominal area, often associated with a large overhang, also known as a pannus. This excess abdominal pannus can make hygiene difficult, interfere with normal activities and exercise, and make finding well fitting clothing difficult. The best option to address the problems in the abdomen is an abdominoplasty, or tummy tuck. (Figures 1 and 2) The procedure for a weight loss patient is performed in much the same way as a traditional abdominoplasty, except that in some patients, the need for a vertical incision in addition to the traditional lower horizontal incision is necessary. This type of abdominoplasty scar is known as a Fleur de Lys scar. Weight loss is circumferential, and thus weight loss patients have excess skin in all dimensions, horizontally as well as vertically. The vertical component of the incision addresses the needs of those patients with a large amount of horizontal laxity in their abdomens. 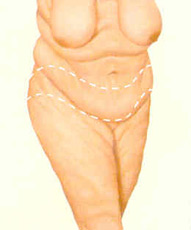 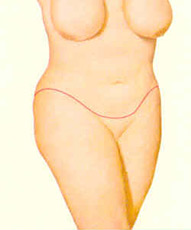 With massive weight loss, many patients find that their breasts have sagged tremendously and have become deflated. The breasts can sag to such a great degree that they almost fall to the belly button. The breast lift, or mastopexy, along with a breast implant is the treatment in most cases. In those women where the breasts have retained a significant amount of breast tissue and the problem is primarily one of sagging, a breast lift or breast reduction alone may suffice. (Figures 3 and 4) 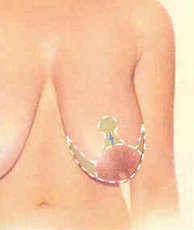 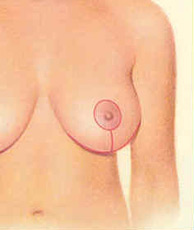 Rejuvenation of the arm area in massive weight loss patients is a unique area in plastic surgery. In most cases, the treatment option that best corrects the excess hanging skin and fat in this area is called a brachioplasty, or arm lift. This procedure involves making an incision from the elbow to the armpit on the underside of each arm in order to remove the excess skin. (Figures 5 and 6) Liposuction is often performed in conjunction with skin excision in order to achieve the best aesthetic result. These results can be quite dramatic, as some patients start with so much excess skin that it looks like they have bat wings. The dramatic rejuvenation of the arm to a normal contour is well worth the scar for these individuals. 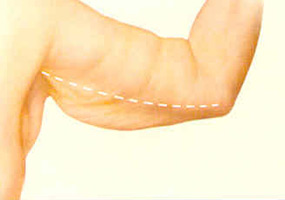 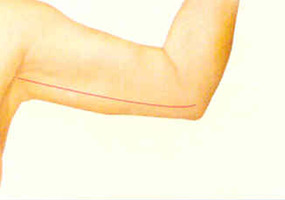 Other areas of concern for massive weight loss patients include extra skin and fat on the lower extremities, most notably on the thighs. Lateral and medial thigh lifts are designed to rejuvenate this area. A lateral thigh lift involves making a curvilinear incision at the top of the buttocks which extends into the groin crease in the front. Through this circumferential incision, the outer thigh tissues can be mobilized and tightened, often with the aid of liposuction. (Figures 7 and 8) The excess skin and fat is then trimmed away. A medial thigh lift utilizes the groin crease incision. In this case, the inner thigh skin is tightened. (Figures 9 and 10) 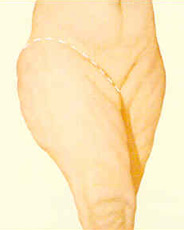 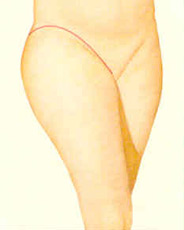 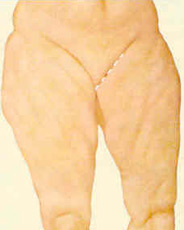 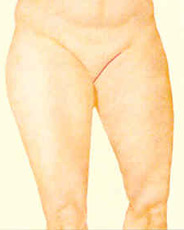 Facial rejuvenation plays a vital role in the total rejuvenation of a patient who has undergone massive weight loss. As a result of the weight loss, large amounts of excess skin under the chin and in the neck area collect due to the loss of skin elasticity. The brow drops considerably, and there is redundant skin around the eyelids, which often causes one to look tired and angry. Many weight loss patients remark that they do not recognize themselves. When they were heavier, their cheeks were higher and fuller, and they had a much more robust look. Facial rejuvenation can return much of that look and achieve a brighter, healthier look. The procedure that best addresses the cheeks, chin, and neck is the SMAS-Platysma facelift, a procedure with which Dr. Chang has special expertise. Rejuvenation of the upper face and eyes with a browlift and eyelid lift can be performed at the same time as the facelift, giving an overall brightened and harmonious look.

There are many options for the massive weight loss patient. Obviously all of these procedures cannot be performed at the same time. During your consultation with Dr. Chang, she will help you to prioritize your goals and develop a surgical plan that meets your needs and expectations. Rejuvenation after weight loss is the final step of your journey towards a healthier lifestyle, and for many patients becomes one of the most exciting and fulfilling steps in the entire process.