Some women have disproportionately large, heavy breasts, also known as mammary hypertrophy. This causes various symptoms such as back and neck pain and shoulder grooving at the bra strap line. These women often benefit tremendously from a breast reduction.

In a breast reduction procedure, excess breast tissue is removed in order to relieve the weight and make the breast more manageable. Excess skin is also removed during the procedure and the nipple is recentralized on the resulting breast mound. The resulting effect is not only more aesthetically pleasing, but can also be a significant functional benefit. (Figures 1 and 2) 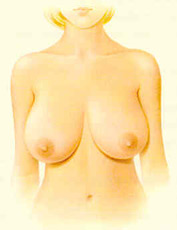 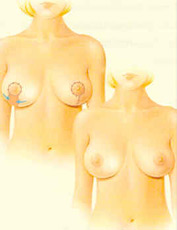 Most breast reductions are performed using one of two different scar patterns: the Wise pattern and the Short Scar (or Le Jour technique). The Wise pattern breast reduction utilizes a scar in the shape of an anchor. This scar encircles the areola, extends downward in a vertical direction to the bottom of the breast, and then extends side to side in the fold beneath the breast, known as the inframammary fold. (Figure 3) 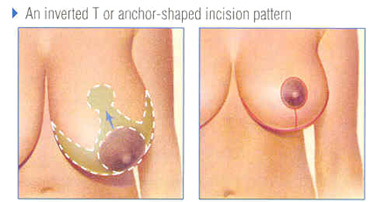 The Short Scar technique uses a scar that is in the shape of a lollipop. This scar encircles the areola, and then extends downward vertically to the bottom of the breast. There is no side to side inframammary fold component, and in that sense, the scar is shorter. (Figure 4) The majority of breast reductions performed by Dr. Chang are with the shorter scar technique. She uses the Wise pattern for only those patients with the largest amounts of breast tissue that needs to be removed. These patients generally are not good candidates for the shorter scar technique. 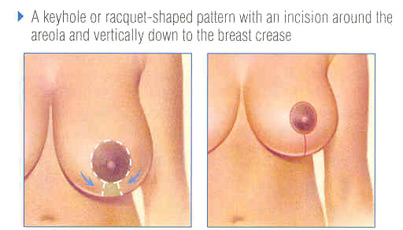 Regardless of which scar pattern is used, the basic breast reduction operation is the same. Through the incisions, excess breast tissue is removed. The nipple and areola remain attached to the remaining breast tissue, and this whole composite is shifted to its desired final location. The skin is shaped around the final breast mound, and the excess is removed. The final result is a smaller breast with the nipple and areola in a more centralized location.

Many women want to know what their final breast size will be. It is difficult to know the exact answer to this, as enough breast tissue must be left to support the blood supply to the nipple and areola complex. This varies from person to person. In general, though, breast reduction can achieve at least a two to three cup size reduction.

Dr. Chang performs breast reductions in a fully accredited San Francisco hospital with board certified anesthesiologists. The procedure lasts between three and four hours. Most patients elect to spend one night in the hospital and go home the next day. Initial recovery is about one to one and a half weeks. Dr. Chang generally recommends that her patients take this amount of time off work, and mothers should have good child care during this period. Patients are able to exercise and resume all normal activities by three weeks. The final swelling and settling takes approximately three to six months, and the scars take six months to a year to mature.

As with any surgical procedure, there can be risks. Specific risks unique to breast reduction surgery include the loss of nipple sensation, the loss of the ability of the nipple to react to hot or cold, the inability to breast feed after the procedure, and numbness on the breast. Additional general risks include unfavorable scarring, bleeding, infection, and anesthetic complications. Fortunately, serious risks in breast reduction are rare, and breast reduction patients are among the most satisfied in all of plastic surgery. Breast reduction surgery is unique in that it can improve the quality of a woman’s life, in addition to producing a more aesthetic result.

This gallery represents only a small selection of photos available for viewing. Additional before/after results are available at the time of your appointment.
Before and After Photos – individual results may vary